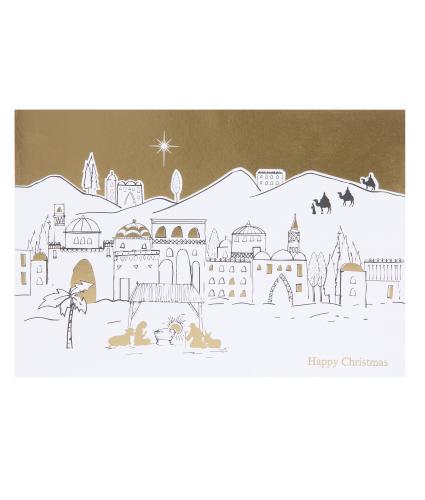 The Son of God Christmas Cards by Jeffrey Archer has been designed exclusively for Cancer Research UK and tells a modern day story about The Son of God, via prose.

"He was born in a barn, his father a carpenter, and his mother a decent woman, but they were no significance, and certainly couldn't afforded to give the boy a private education. And yet, as a teenager, he was arguing the toss with his elders and betters in the council chambers.

He never got a proper job, just roamed around the countryside, unshaven, and living off bread and water and the occasional fish, while offering his opinions to those who cared to listen.

He became the manager of a football team known as The Disciples, not one of them a star, in fact the twelfth man rather let the side down by accepting a transfer fee of thirty pieces of silver to play for the opposition.

The authorities eventually arrested him as a rabble-rouser, but couldn't decide what to charge him with, other than the fact he claimed he was the Son of God."